Rotavirus is a disease which primarily affects infants and young children, causing watery diarrhoea, fever, vomiting, dehydration, and abdominal pain. Often these symptoms are so severe that patients will need to be hospitalised and if not properly treated, can lead to fatality. It is extremely contagious and is generally passed when shedding stool of an infected person and then spread through contaminated objects or person-to-person contact. 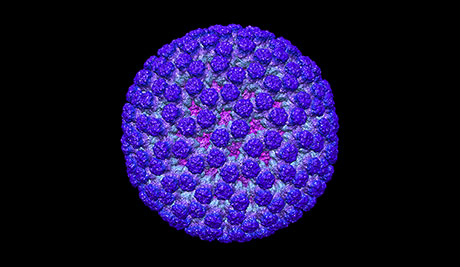 Globally, rotavirus results in the deaths of approximately 215,000Â children every year, mainly in low income countries. Current evidence suggests that susceptibility to this infection is connected to hereditary differences in histo-blood group antigen phenotypes, as determined by secretor status and the Lewis antigen system.

Additionally, there are two main types of Lewis antigens (which is the human blood group system), Lewis a (Le-a) and Lewis b (Le-b). The presence or absence of these two antigens gives rise to four possible phenotypes in humans: Le (a+b-), Le (a-b+), Le (a-b-), and Le (a+b+).

These genetic differences in the human immune system - secretor status and Lewis phenotype - can cause people to respond to infections and vaccination differently, but few studies have looked at the connections between these forms of hereditary immune variation and rotavirus vaccine efficacy, a serious issue in developing countries. 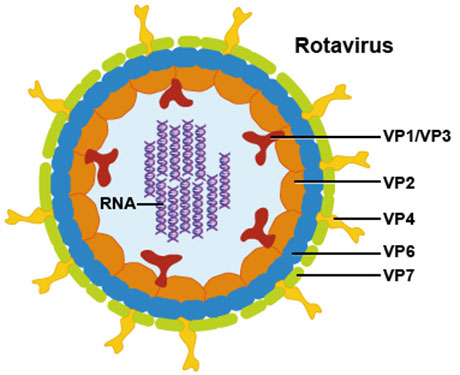 Rotavirus can be prevented using two live, attenuated oral vaccines - Rotarix and RotaTeq. The World Health Organization has recommended that the administration of the rotavirus vaccine be included in all national immunisation programmes; new rotavirus vaccines are also in the pipeline which can be incorporated in Extended Programs on Immunization (EPI). While this has increased overall international coverage from 8 per cent in 2010 to 25 per centÂ in 2016, many countries with a high disease burden rate have yet to implement the rotavirus vaccination in their EPI programmes.

Surprisingly, the oral rotavirus vaccines have been found to have reduced efficacy and effectiveness in countries with high child mortality where the burden of the disease itself remains high, including Bangladesh.

To understand why this loss of vaccine efficacy occurs, icddr,b in collaboration with the University of Virginia and University of Vermont from USA conducted the first ever studyÂ to investigate the effects of secretor status and Lewis phenotypes on rotavirus diarrhoea in South Asia. It is also the first research which assessed the impact of secretor status of the children on the estimates of oral rotavirus vaccine efficacy.

The icddr,b study analysed data from 275 vaccinated and 275 unvaccinated infants, further categorised according to their secretor status and Lewis antigen phenotypes (Table 1). Findings demonstrated that approximately 37.5 per cent of unvaccinated infants suffered from at least one episode of rotavirus diarrhoea (RVD), with P[8] being the most common strain of the virus.

Non-secretors in the unvaccinated group had a reduced risk of RVD and were completely protected from P[4] strain of the virus. While there was no difference in overall risk of RVD according to Le phenotype in unvaccinated infants, Le- children were more likely to develop P[6] regardless of secretor status. Interestingly, Le- infants exhibited fewer episodes of any or severe P[8] strain (Table 2). 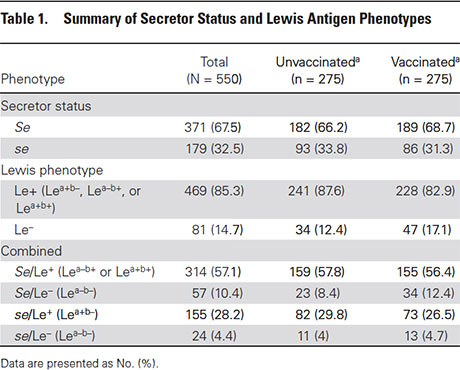 One of the key results from this study is the discovery that while secretor status affects the efficacy of the rotavirus vaccine, there was no association with Lewis phenotype and the vaccine efficacy. Furthermore, while secretor status played a key role in determining the risk of RVD in unvaccinated infants, the opposite was deduced among vaccinated infants, indicating that the effect of vaccination substantially relied on secretor status. For non-secretors, vaccine efficacy against severe RVD was 31.7 per cent while the figure stood at 56.2 percent among secretors.

This is of particular concern in the context of Bangladesh where 32.5 per cent of the population are non-secretors. This highlights that decreased vaccine efficacy, especially in less developing countries, could be due to a lack of consideration on the effect of non-secretor status on susceptibility to RVD in vaccine trials. The authors conclude that, based on their findings, future oral rotavirus vaccine trials should take into account secretor status, Lewis phenotype, and rotavirus genotype.

Dr Rashidul Haque, one of the authors of the publication denotes that the study demonstrated that “inÂ a cohort of Bangladeshi infantsÂ in DhakaÂ thatÂ human histo-bloodÂ group antigenÂ phenotype determineÂ susceptibilityÂ to rotavirus infections and impacts the measure of rotavirusÂ vaccine efficacy. This findingÂ partially explains the low rotavirus vaccine efficacy in Bangladesh”.

This is a critical study which determined that in the absence of vaccination, non-secretor status was associated with a reduced risk of RVD which in turn reduced estimates for vaccine efficacy not just in susceptibility for P[8], as reported in previous studies, but also complete protection against P[4] of the rotavirus. These data can have profound implications in designing future vaccine trials, and ultimately the development of vaccines which could provide complete coverage to all those afflicted with rotavirus.